Barber’s Driving School, Inc. was founded by Mr. B. C. and Mrs. Coree Barber in 1964 as AAA Driving School of Columbus. The school was established as a family business, owned and operated as a partnership between husband and wife. This budding business was located at the Barber’s home in Cascade Hills in Columbus, Georgia. Mrs. Barber ran the administrative duties of the school, and Mr. Barber delivered the training. In the beginning, the school only offered behind-the-wheel driving instructions to adults and some teens.

There were several dynamics in the market during the early sixties that created an unusual number of adults who never learned to drive a vehicle as a teenager. As it was more common for the man in the 1930s, 1940s, and 1950s to be the sole driver in the family, many widowed women, as old as 50, 60, and 70, were beginning to learn to drive after losing their husbands and finding themselves in need of transportation.

The other social phenomenon that affected the adult driver population was that women were entering the workforce in larger numbers, and family vehicle ownership was changing from one vehicle per family to two and sometimes three vehicles per family. Another dynamic which was unique to the Columbus market was the geographical location of Fort Benning to the Columbus area. After the Korean War and the Vietnam War, many returning soldiers brought wives from foreign countries. Most of our newly married foreign servicemen’s brides had never learned to drive; in fact, many had never ridden in an automobile. With thousands of untrained adults arriving in Columbus, a new market began to emerge for teaching people from different countries, with little or no English language skills, to drive on Georgia highways.

In addition to the driving school, Mr. Barber was a full-time police officer, and because of this, was unable by himself to meet the demands of giving all the instruction. Subsequently, the Barber’s purchased a second, a third, a forth, and then a fifth car, hiring and training other police officers to help with the instruction of student drivers. By the end of the sixties, the company was still being operated out of the Barber’s home and had hit a level of growth that demanded expansion, thus, spiraling Barber’s into a 30-year period of growth.

By the beginning of the seventies, AAA Driving School had hit a period of vertical growth that required a new strategy. This new strategy included an office outside the home and a way to compete with new external forces that didn’t exist during the previous seven years. By 1971, AAA Driving School would incorporate the school and move into new offices with classrooms in Cross Country Plaza, off Macon Road in Columbus.

At this same time, Georgia lawmakers voted to regulate commercial driver training schools through the Department of Public Safety (DPS). The DPS was given the responsibility of setting state licensing requirements and monitoring all Commercial Driver Training Schools in the state. In addition to these new regulatory challenges, Sears and Roebuck Company decided to enter the driver training industry and opened in Columbus at its Macon Road store. This would be like a Wal-Mart Supercenter opening next door to a small mom-and-pop grocery store.

By 1972, Columbus had three commercial driver training schools. The other two were much larger than AAA and consequently had a mountain of new red tape with which to deal. The Barbers knew that they could not match the financial strength of a Sears and Roebuck Company and did not try to do so. Instead they began developing a strategy that still exists in the company today. This strategy emphasizes the differentiation of its products and services by customizing the training sessions to meet the needs of the students and expanding the philosophy of this family-owned and operated business to treat you, the customer, as family.

This new strategy paid off within two or three years, because both large competitors left the Columbus market. AAA had clearly established itself as the leader in traffic safety and driver education in Columbus. AAA then began to develop strong relationships inside the new regulatory agency and began lobbying for higher standards for driver training school owners and instructors. Relationship building is one of the many strategies that Barber’s used to help shape and mold rules and regulations that affect the industry, as well as Barber’s operations, both then and now.

Over the next thirty years, Barber’s expanded its product line to add classroom instruction for teenagers and develop its Teen Driver Education program, which has been taught to over 50,000 teenagers. The Teen Driver Education Program brings measurable positive results, unmatched by any school in Columbus and in the United States.

In 1975, AAA contracted with Roosevelt Warm Springs Rehabilitation Hospital and began teaching handicapped drivers who had both mental and physical challenges. The contract lasted for eleven years. During which time, AAA taught over 3,000 people with physical and mental challenges to drive safely.

In 1978, Georgia enacted the Driver Improvement Act, allowing early reinstatement of suspended driver’s license due to DUI and drug conviction charges. The new law was regulated, initially, by the Department of Human Resources, who contacted us for quick and reliable distribution of the service. The new company that distributed the service would be a wholly owned subsidiary of AAA called Barber’s Risk Reduction Program, Inc., as required by the state. Since 1978, Barber’s has helped over 20,000 Georgia drivers get their license reinstated.

The Driver Improvement Act also included a license reinstatement component for people who lost their driving privileges for reasons other than DUI or drug charges. The program that was developed for this Act is known as the Defensive Driving Course.

Throughout the seventies, AAA expanded by doing driver’s education training for many private schools in Georgia and Alabama—for example, Brookstone, Pacelli, Glenwood, Lee Scott Academy, and others.

In 1989, Mr. Barber was asked by the Department of Public Safety to develop the Georgia’s Defensive Driving Course, which had been taught for more than ten years by over 100 driving schools throughout the state. The Department of Public Safety was capitalizing on the experience and knowledge that the Barbers had gained since the beginning of AAA Driving School. For AAA, product sales were good, and the company continued to set itself apart from other schools, becoming a state leader in training students and instructors across Georgia.

In 1992, AAA changed its name to Barber’s Driving Academy of Columbus, Inc. after a dispute with the AAA Motor Club. The AAA Driving School had been in existence years before AAA Motor Club, but the Motor Club had a federal name and trademark registration which superseded the name rights given to the Barber’s by the State of Georgia.

The nineties were even more explosive for the Barber’s with the opening of its first Tractor Trailer Center in Columbus and eleven field offices in Alabama and Georgia. The Tractor Trailer School was initially owned by Mr. and Mrs. Barber as a wholly owned company of Barber’s Driving Academy. After two years of operation, the Barbers sold it to their son, Al Barber, who operates Barber’s Driving School today. The school’s Tractor Trailer Center operated from 1994 until 1998 and trained close to 4,000 people across the nation to drive tractor trailers.

With the death of Mrs. Barber in 2002, and the illnesses of Mr. Barber, the company came to a crossroads, and a decision was made for the family succession of the company. At this point, Barber’s Driving School had already trained 80,000 drivers from 110 countries to drive everything from cars to tractor trailers.

The Barbers chose to continue the school and do this through their son, Alfred R. Barber (Al), and grandson, Alfred Barber, Jr. (Buster). Buster was already working at the school at the time of Mrs. Barber’s death and assumed her role as administrative manager. B. C. Barber continued his role as school director. In 2004, B. C. Barber learned that he had leukemia and was unable to teach during treatment. Al, his son, assumed the duties of school director. By the end of 2005, Mr. Barber had passed all his day-to-day responsibilities to Al.

Today, the company operates all of its companies under the name of Barber’s Driving School, Inc.

To create excellence in Driver Education, Behavior, Evaluation, Improvement, Rehabilitation, and Testing, using proven methods and new technologies to accomplish our goals. To measure and improve our results through Research and Development using scientific means.

To treat each customer as family with their health and safety being our greatest concern. 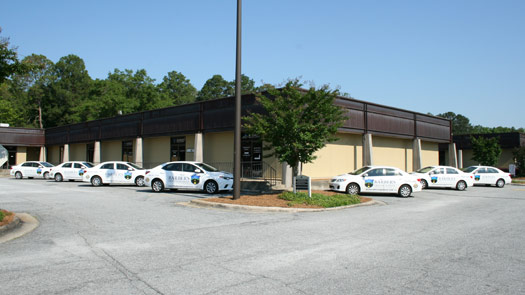 Download an application for employment with Barber’s Driving School. The applications are in .PDF format. Please print it, fill it out, and then drop it off in person at our office.